Most of our race reports cover gentle plodding through the countryside, the occasional daft distance, but generally recreational… some of our members are a bit different though… check out Tobs report from Ironman 70.3 Staffs! Don’t worry 70.3 is just the short distance version!!!

“You’ll smash it!” they said. “Go and smash it!” cried the crowd on Facebook…the only problem was that no-one thought to explain to me what “it” was….oh, and when they compiled the ‘Elf and Safety Risk Report the 6 foot 8 inspector didn’t allow for 5 foot 7 idiots called Tobs!

IronMan always involve a certain amount of faff. You have to register the day before, attend the safety briefing (hmmm…), pack your worldly belongings in to a kaleidoscope of coloured bags and drop them off around the country as though on some form of reverse treasure hunt.

After the traumas of the M6 to get to IronMan UK last year we made sure we left Martock bright and early on Friday to get up to Stafford in plenty of time. A smooth journey and we were soon registered and browsing the merchandise tents for some more M-dot tat with which Marko could kit out his love mobile…IronMan branded door mat (I kid you not) for the bargain price of £26:99, I kid you not! 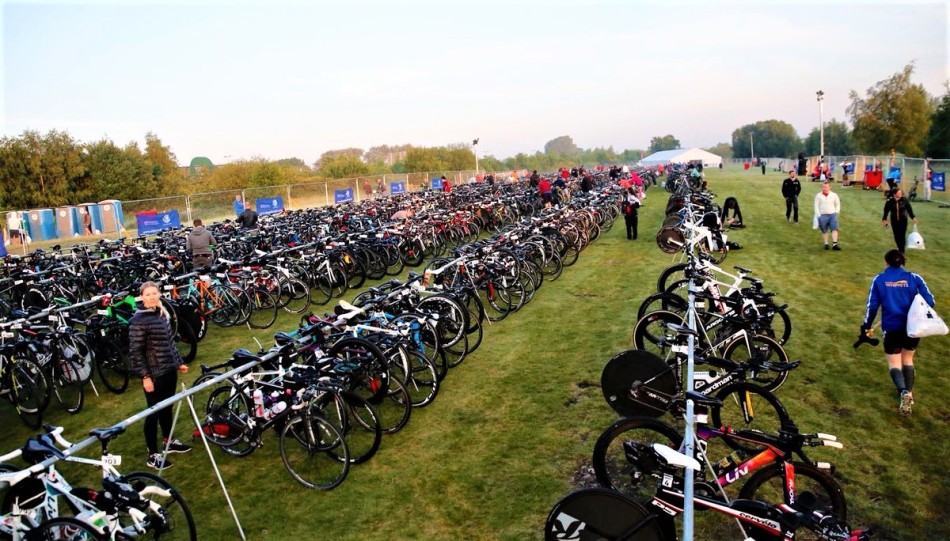 Saturday started calm only to descend in to a welter of panic as an issue with a friend’s bike meant led to an impromptu hunt for a local bike shop that was still open followed by hightailing it 12 miles south to T1 to drop off the bikes and blue bags before swinging around and driving 20 miles north to Stafford to drop off our red run bags with less than 5 minutes to spare before transition closed (considerably better than the poor wannabe triathlete who we watched screech up 10 minutes later and desperately try to register 2 hours and 5 minutes after registration had closed).

Lesson learnt we were up bright and early at 4:30 on Sunday morning and desperately trying to force porridge in to violently protesting tummies (who, sensibly, just wanted to be back in bed) whilst a beautiful dawn broke over our campsite on Cannock Chase. 20 minutes in the car and 10 minutes in a bus (sharing gallows humour with the other condemned prisoners) and we arrived at the Chasewater, the start venue, ready to join the 150m queue for the port-a-loos.  Long enough so that by the time you’d done your business, you probably needed to go straight to the back of the queue ready for the next bout of nerves.

After the usual contortions of trying to squeeze in to our wetsuits we wandered down to the water’s edge…or at least where the water’s edge should have been. Unfortunately that lovely still morning had morphed in to a heavy mist that sat on the lake going nowhere fast. This was a worrying development with the road closures meaning that if we didn’t get in to the lake soon there would be no swim and so no “tri” for our “athlon”. The clock ticked by and the toilet trips mounted in number…but still no movement of the mist…with less than 10m visibility there was no way the organisers were going to let 2000 of us in to the lake, they’d have been finding people still bobbing around two weeks later!

Finally just after 8 as we were all giving up hope and wondering what the pandemonium of setting off 2000 cyclists simultaneously would be like the announcement came over the tannoy that we would be off in less than 5 minutes…panic! Handshakes all round and in to the long line of nerves. Klaxon blast and we shuffled forwards, along the jetty and down the ramp in to the grey waters. In to the washing machine of flailing limbs and gasping breath. When we had recced the route two weeks before the lake had been bitterly cold still, fortunately two weeks of sun had warmed it so that it was almost perfect.

I managed to find a relatively good rhythm pretty quickly and the swim went well despite the usual panicky thought about half way through “OMG, this is a long way to swim”. That thought was quickly dispelled as the slippery ramp out of the water appeared ad I was struggling to stand and unzip my wetsuit. A nice short run to the transition tent and a chance to sit down whilst donning my bike kit…a handful of nuts and jelly babies and a swig of coke to kill anything I may have ingested in the lake (not wanting to do a Will Irvine and chunder spectacularly everywhere). 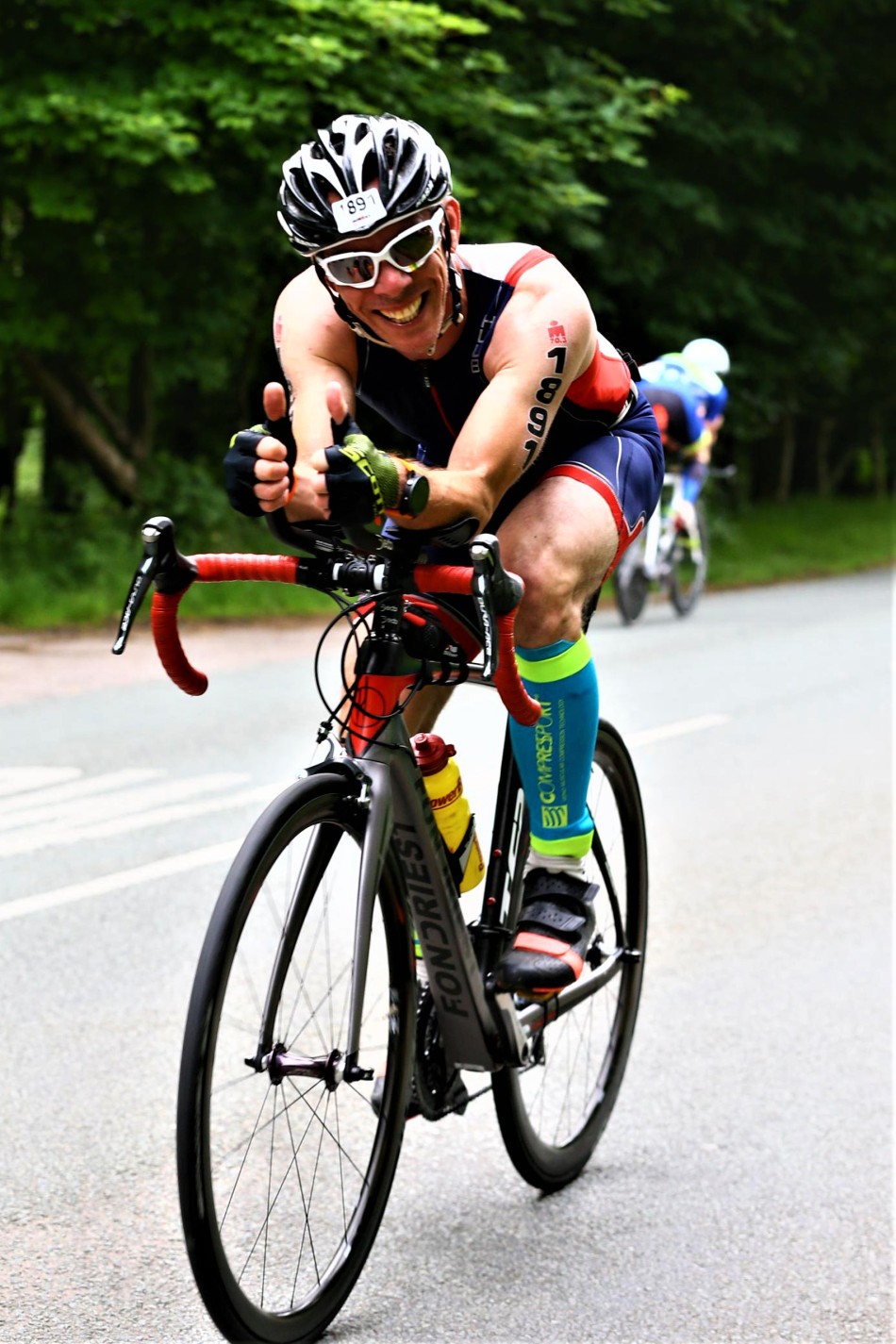 The bike route starts with 10 miles of twisty, pot-holed narrow country lanes before opening out on to a wide A road and the chance to open the metaphorical throttle. The bike was immense fun, riding at my absolute threshold, pushing it as hard as I dared and hoping not to pay the price and blow up whilst duelling with some of the really fast boys and girls on their sleek time trial rigs. At about 40 miles we climbed up on to Cannock Chase, a really beautiful plateau of woodland, and past our campsite. It also offered the opportunity to see the pros as they screeched down the hill on the other side of the road on their way back off Cannock Chase about 15 minutes ahead of me – now they can shift! The rolling last 7 miles were hard work with my legs tiring. Three and a half miles out from the finish I felt the queasy sensation of my back tyre running flat…would it last long enough for me to get to T2? Within a mile it was apparent it wouldn’t (especially as I was on a pair of very nice carbon wheels lent by the club’s gentleman (Marko)) and I had to quickly decide whether to just try to put some new air in or change my inner tube? It seemed a slow puncture so off the bike, fiddle around with the pump, air in and back on the bike…fingers crossed. No luck, it was going down faster this time. With just over a mile to go another decision, change the tube (which would take several minutes) or run with the bike? Hence the amusing sight of me desperately trying to run whilst wearing super stiff carbon soled cycling shoes…clip clop, clip clop. At least the crowd were very supportive if slightly bemused. I subsequently found a pin tack in my rear wheel and on reporting it to a marshal it turned out that some kind soul had liberally distributed tacks all over a section of the road causing numerous punctures (Ro saw at least 5 people punctured in that section on her ride) – frustrating!

My legs in shock from running in bike shoes, it was nice to change in to more comfortable running shoes and head out on the half marathon. By now the sun was beaming down and my route was a bit of a zigzag as I sought out every bit of shade I could find. The route led in to Stafford town centre from the football ground where T2 was and was then 3 circuits of a convoluted course that doubled back on itself numerous times – not a great route for a quick time as your rhythm was constantly being broken. However there were copious numbers of much needed feed stations manned by incredibly enthusiastic volunteers who really made a massive difference.

As always the run evolved in to a mental battle, my legs telling me that they couldn’t go any further and my head saying “just run to the next corner/mile/feed-station”. I was trying to keep an eye out for Ro to check that she was doing alright as I hadn’t seen her since about 5 minutes before the start. Agonisingly slowly the miles ticked down and with 3 miles to go and the tank on empty there was nothing left for it but to reach for the emergency gel (that one has lasted me since July last year, but now it was time for it to step forward in to action). Gel in, fire up the legs, head down and let’s get to the finish…error! The course led through a park alongside a very tempting stream, looped over a small bridge and back down the other side of the stream. I’d already been over this bridge twice, I was familiar with it, no worries. What I failed to note (and equally whoever had conducted the Elf & Safety Risk Assessment) was that the stone pillars either side of the entrance to the bridge were topped with very attractive coping stones that protruded by about 4 inches…oof! Suddenly I was lying on my back staring at the sky. I could see a couple of marshals running towards me and my brain went in to overdrive…if they get to me and find me injured they may pull me from the race…argh! Quick check: concussion? No. Blood? A bit. Everything else working? As good you would expect after four and a half hours of racing. Get moving, Ward!

Of course the only time I saw Ro during the whole event was about 800m later as we passed each other running in different directions. Fortunately she’s known me for long enough to know that whilst I’m an idiot, I’m not entirely stupid.

“See you at the finish.”

On I plodded like something out of a bad 1980s horror movie, spitting blood and scaring children. Focus on the line, one step in front of the other and keep going. Finally a turn in to the wall of noise that was the finishing chute and its bright red carpet (now being dotted with a darker red).

Over the line and a quick collapse (well you have to milk these things for as much as you can) to the shout of “Medics!”. Off to the medical tent for the liberal application of glue and an audition as an understudy for Harry Potter.

Unfortunately my time with the medics meant that I missed Ro’s triumphant run down the red carpet as she completed her first long distance triathlon 15 minutes inside her target time, despite only having competed in her first triathlon at the end of March. And that despite being held up in T1 for 5 minutes whilst an ambulance evacuated someone from the swim – it was obviously one of those days.

Overall a good triathlon with great support and volunteers, a nice swim venue and a great, fast bike course. The logistics around the transitions could be improved and the run course was too twisty for my liking. If you go to Stafford, check in on my favourite stone pillar, the last I heard from one of the paramedics they had had to wrap it in padding from where it tangled with my forehead.